While the Arachnids can rely on virtually limitless numbers, the Mobile Infantry must develop effective tactics to overcome this imbalance. Deploy your units at strategic locations to cover vital choke points and gain superior firepower through tactical use of elevation levels. Be wary, however, that battle mechanics such as True Line of Sight and True Line of Fire also allow Bugs to lay ambushes around every corner, as they are well known for their use of surprise attacks and deception.
An expansive range of unique units, weapons, and special abilities are at the disposal of M.I. commanders. Infantry squads armed with Morita Assault Rifles and MX-90 Fragmentation Grenades form the mainstay of your forces. Rocket Troopers deliver deadly payloads with pin-point accuracy while Engineers are vital to shore up defensive positions with MG turrets, barricades, and minefields. As a campaign progresses, technological breakthroughs unlock the true potential of the Federation’s arsenal with E-Pulse rifles, TAC Fighter airstrikes, heavily armed Marauder mechs, and many more developments optimized for spraying Bug ichor across the battlefield. 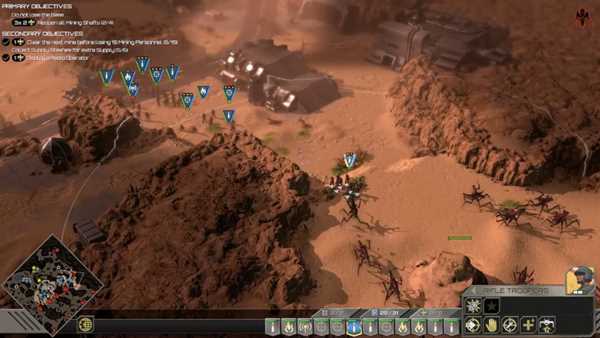